Over the past few years, I’ve heard from several pastors and Christian leaders a genuine fear that the rising generation of evangelicals will compromise the faith when it comes to public engagement. But I actually don’t think this will happen, for one reason: The gospel.

In the rising wave of evangelicals, one hears the constant refrain of “gospel focus” and “gospel centrality.” Some might dismiss this as just more evangelical faddishness and sloganeering, and perhaps some of it is. But I think the focus on the gospel is tied up with the collapse of the Bible Belt. As American culture secularizes, the most basic Christian tenets seem ever more detached from mainstream American culture. There is, for those who came and will come of age in recent years, no social utility to embracing them. Those who identify with Christianity, and who gather with the people of God, have already decided to walk out of step with the culture. These Christians have already embraced strangeness by spending Sunday morning at church rather than at brunch.

Those who were nominally Christian are suddenly vanished from the pews. Those who wanted an almost-gospel will find that they don’t need it to thrive in American culture. As a matter of fact, cultural Christianity is herded out by natural selection. That sort of nominal religion, when bearing the burden of the embarrassment of a controversial Bible, is no more equipped to survive in a secularizing America than a declawed cat released in the wild. Who then is left behind? It will be those defined, not by a Christian America but by a Christian gospel.

To understand why this leads to greater engagement rather than to lesser engagement, we must understand what the slow-motion collapse of the Bible Belt is about, in the first place. This changes not just the number of unbelievers, but the way that believers themselves think, and relate to the outside culture. Philosopher James K.A. Smith, analyzing the work of Charles Taylor, gives the example of an evangelical church-planter relocating from the Bible Belt to a “post-Christian” urban center in the Pacific Northwest. The church planter is equipped to evangelize and make disciples by asking people diagnostic questions about what’s missing in their lives. A generation or two ago, that might have been what they were trusting in to get to heaven. In more recent years, it would have been what’s missing in order to grant meaning and purpose to their lives. The central issue isn’t that the church planter isn’t adequately trained to answer their questions; it’s that they are asking different questions. They do not feel “lost” in the world, and they don’t feel as though they need meaning or purpose. The effective evangelist must engage not only at the level of the answers, but also at the level of the questions themselves.

The same will be true when it comes to the social and political witness of Christianity in a new era. Older generations could assume that the culture resonated with the same “values” and “principles.” They could assume that the culture wanted to conserve their “Judeo-Christian heritage.” Increasingly, the culture doesn’t see Christianity as the “real America.” If Christianity is a means to American values, America can get by without it, because America is learning to value other things. This is, perhaps counter-intuitively, both good for the church and good for the church’s engagement with the outside world. J. Gresham Machen warned the church in the 1920s not only that bartering away orthodoxy wouldn’t gain the church cultural credibility, but also that the great danger for the church is to see Christianity as a means to some other end.

Christianity does indeed build stronger families, he argued, and it does indeed provide an alternative to Marxist ideologies. But if Christianity is embraced as a way to build strong families or assimilate people into American values or fight Communism, it is no longer Christianity but an entirely other religion, one he called “liberalism.” In the last generation of Christian public engagement, there were some genuine prophets and saints, who called the church out of isolation but constantly warned against a political captivity of the church, a captivity that would tap Christianity of its righteous zeal for the sake of power but would, ultimately, drain it of what every culture finds most troublesome: the exclusivity of Christ.

A church that assumes the gospel is a church that soon loses the gospel. The church now must articulate, at every phase, the reason for our existence, because it is no longer an obvious part of the cultural ecosystem. That articulation of the gospel will mean engagement because the most pressing issues are not ancillary to the gospel, in the way some other cultural and political issues are.

The temptation will be, as always, to overreact to the sins and foibles of the last generation, with a pullback altogether in an attempt to avoid culture wars and social gospels. A recalibration is called for, to be sure. We are a different people facing a different context. An attempt at wholesale withdrawal might exempt us from some of the hucksterism and moralism of some figures in our parents’ and grandparents’ generations, but it will take us back to the opposite errors of some in our great-grandparents’ generation, back to divorcing the gospel from the kingdom, the love of God from the love of neighbor. We could shrug off our social witness altogether, as a defense against legalism. But we would be wrong, and we would, ironically, fall into a Pharasaism of the other side, building hedges around a temptation to avoid falling into it. More that that, we would be abandoning a post to which we were assigned and from which we have no permission for leave. The test will be if we can engage the culture without losing the gospel.

If we ever were a moral majority, we are no longer. As the secularizing and sexualizing revolutions whir on, it is no longer possible to pretend that we represent the “real America,” a majority of God-loving, hard-working, salt-of-the-earth cultural conservatives like us. Accordingly, we will engage the culture less like the chaplains of some idyllic Mayberry and more like the apostles in the Book of Acts. We will be speaking not primarily to baptized pagans on someone’s church roll, but to those who are hearing something new, maybe for the first time. We will hardly be “normal,” but we should never have tried to be.

This article is adapted from my book Onward: Engaging the Culture Without Losing the Gospel. 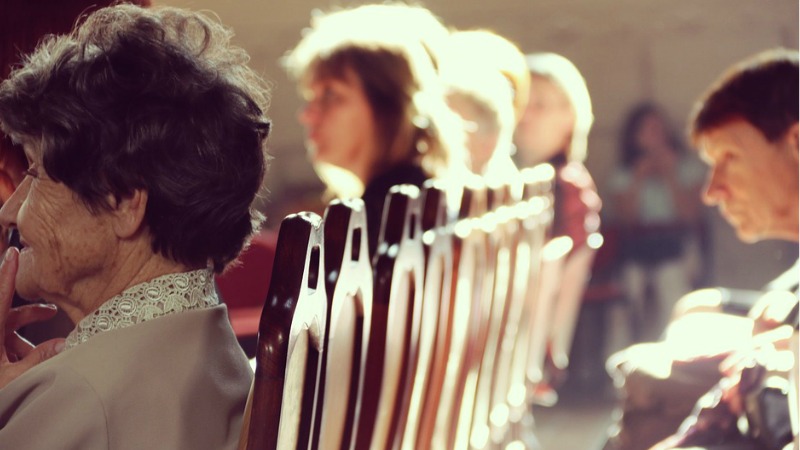 The Spiritual Warfare of Boring Preaching