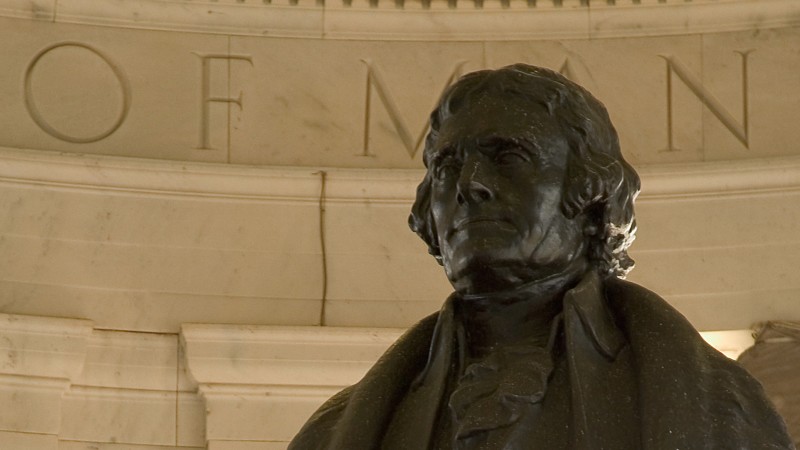 A few years ago, I stood at the grave of Thomas Jefferson, and wondered. I was in Charlottesville to speak at the university Mr. Jefferson founded, and made my way up to his homeplace, Monticello. Standing at his grave, I was prompted to give thanks for his life and legacy.

After all, if it weren’t for Jefferson and his majestic Declaration of Independence, there might not even be a United States of America, and certainly not a country quite like it is now. If it weren’t for Jefferson (and the Baptists), would I have grown up in some cold, dead, state-established Anglican church instead of the vibrancy of a free church in a free state? And, of course, if President Jefferson hadn’t purchased the Louisiana Territory, I would have grown up some place other than America.

But, much more than that, standing at Jefferson’s grave prompted me to realize that Jefferson is, well, in a grave. The Enlightenment ideals that gave this brilliant thinker a right understanding of natural rights led him to idolize human cerebral capacity. Jefferson’s anti-supernaturalism is seen in visual form in his famous Bible, with the miraculous parts cut out, most significantly the bodily resurrection of Jesus. I love Jefferson for standing up against King George, but not for standing up against King Jesus.

And yet, two hundred years later, belief in the resurrection of Jesus persists. Just days after I was at this hero’s grave, Christians from all over the world, despite all this science and all this progress and all this technology, confessed what the earliest believers in the catacombs of Rome cried out: “Christ is risen indeed.”

Thomas Jefferson is still dead. I thank God for him, but standing at his grave reminds me how limited even his legacy can be in the grand scheme of trillions of years of cosmic time. It also reminds me of the contrast with a Middle Eastern day-laborer whose monument isn’t a house or a temple made with hands, or even a simple grave-marker. It’s instead a borrowed tomb that isn’t filled anymore.

That empty tomb is, itself, a declaration of independence. By raising Jesus from the dead, God declared him (and all who are in him) to be free from death, free from the curse, free from Satan’s accusation. I suppose you could say that Jesus was endowed by his Father with certain unalienable rights, among these life, liberty, and the pursuit of happiness… except that these blessings don’t end in a graveyard.